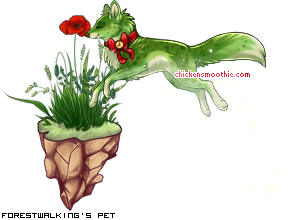 In the world of floating islands, not many can traverse them with ease without a bit of magic.

The wolves and foxes of the land can do a type of jump, known as a Leap, to make it up onto the floating islands.

The wolves and foxes will hop from island to island, one by one, to reach their destination.

One such wolf wanted to reach an island of flowers. She wished to make a gift for her partner; a bouquet of red flowers from the island they met. So, she began to Leap. Effortlessly, she sprung from one island to the next, leaving a trail of stardust and magic in her wake. With each Leap, she got closer to the island of flowers. The closer she got, the more flowers began to appear on the islands she would Leap onto.

She felt her heart race with excitement at the idea of giving her partner the flowers, motivating her more and more. And soon enough, she made it to the island; it was filled to the brim with red flowers. A large smile grew on her face as she ran to the flowers, beginning to pick them and arrange them into a beautiful bouquet. After a while, she began to Leap down, making her way back to the island the rest of the wolves and foxes lived.

Images (not counting background and navigation buttons) belong to Chicken Smoothie, Writing and Character (Concepts) belong to Yo, It's Alex. Fox